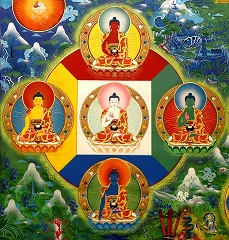 The calculation of the five families of the Dakini

On any day of the dakinis of Vajra [families] will be the harm that comes from the pishacha demons, the Mara demons, the Mamo demons, the death demons. As for diseases, if the feet and ribs tingle and twist, then diseases associated with devastating nausea and tumors will manifest. Will be harmed by the Naga and the demons Sen. It will be useful if you practice the five types of blessings and [recite mantras] of interdependent arising. If this does not help, then when you make the shape of a black dog and a black Raven inside a ceramic Cup, place it on the edge of a large stream [river or road] in an easterly direction, performing as a ransom ritual among the noisy trees.

The tradition of calculating the days of the five Dakini families